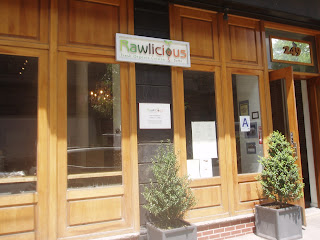 Our recent trips overseas have reaped bountiful rewards in our raw food and healthy living journey.  In New York, we kept encountering raw food enthusiasts in unexpected places, including a waitress in a cocktail bar, and the buyer for one of Robin’s key business contacts in the greetings card industry. Raw food restaurants are undoubtedly the ‘in thing’.  And in searching them out – what treats we had in store! We found a beautiful new one, Rawlicious, round the corner from our hotel in the SoHo district, where they had a special event: one of raw food’s original founders was hosting a demo and a six course feast the next evening! 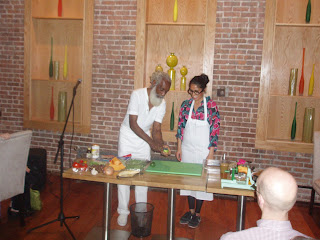 Despite looking like an Indian guru, with his deep-set eyes and fluffy beard, Aris Latham is of Afro-Caribbean stock, and came to New York from Panama in 1964 – “out of the bush and into the ‘hood” as he says. He hung out with the hippies, and encountered the Standard American Diet (SAD).  The various revolutionary movements of the time – black power, natural hygiene movement, – recognised food as a weapon – or a tool of empowerment.  He started looking for fresh life in living food, and became a vegetarian in 1970.  He is largely fruitarian and has had no cooked food for 37 years – and at 67 looks extremely well on it and has bags of energy. He has trained many raw food chefs, and served nutritional wellbeing to a host of celebrities.

Aris gave us lots of information and inspiration on the benefits of eating from Nature’s larder.  He does not like the term ‘raw food’ – he says that all the food he likes IS cooked – to perfection – by the sun!  So he coined the termed ‘sun-fired’, a development of another term in circulation, ‘un-fired’. 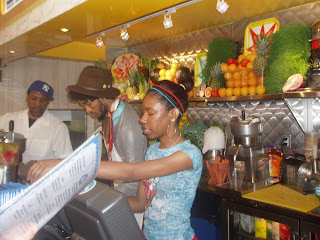 He advocates eating plenty of fruit – especially juices where the fibre has been removed – as a means of gaining simple carbohydrates – rather than complex ones such as starch.  These clog up the body which has to work hard to break them down into sugars that can be used for energy.  He believes in making things easy for the body.  He recognises that people who are sick or have weak digestive systems (which affects many people who were not breast-fed for a good two years as infants, he says) may need to dilute juices with water and be careful not to overload the blood sugar.
“Its not about which food gives us energy, but which robs us of our energy.  We don’t want foods that overtax the digestive system.”

Starch and fats do not digest well together, and tend to result in being stored as fat. The worst thing, he says, we can have to break our overnight fast is starch, which clogs the body – and yet that is precisely what the majority of westerners sit down to – a big bowl of cereal and milk!

His particular recommendation is to eat a rainbow diet.  As a colour light therapist I am very aware that each colour carries its own vibration, effectively a message which the cells of the body understand.  So I could follow when Aris said that by eating a rainbow of fresh living coloured foods, we are providing all the information the body needs to heal itself and stay in balance.  The electro-magnetic power of living food is much greater than that of cooked or processed food – and carries a stronger vibration.  This has been demonstrated in Kirlian photography, which captures the electro-magnetic outputs of living things. And the pictures below demonstrate how much more energy is beaming out of raw rather than cooked broccoli: 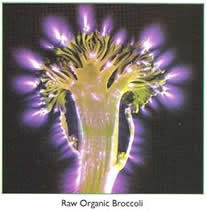 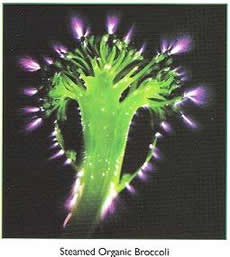 Aris also says it is wrong to believe that only water drunk on its own is hydrating.  Indeed, bottled or tap water may not be helpful to us at all. He believes it is better to take in moisture from fruit and veg – it does hydrate us, and adds a vibration, its living juice, plus minerals and nutrients. He recommends watermelons and coconut water in particular, and he runs fasting weeks just using the latter.
He stressed that the three essentials of health are:
Good clean foods with lots of moisture
Exercise
Regular 36-hour detox/fasting.
His final words were: “ Don’t cheat yourself ‘Its not the food in your life, it’s the life in your food’” and 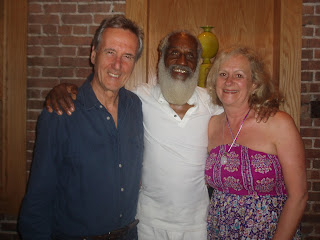 We will be incorporating some of his principles into the detox retreats we are planning to run in the year ahead!

Next Steps for Our Reset Retreats – and online Colour Light sessions!

The Lock Down Lighten Up Retreat!

BEATING THE VIRUS – LIMIT THE RISK AND FEEL SAFE!

Gifts of Health this Christmas?

Winter Wellness in the Quantock Hills